This is the first of eight myths articulated by fictional parents David and Laura Sherwood at the outset of the short film Talk to Strangers. The Sherwoods are interviewed by a filmmaker as they begin to contest custody of their two children, twelve-year-old Emily and nine-year-old Nicholas.

“We do a pretty good job of insulating our kids,” says Laura, confident that she and David can control the custody case’s impact upon their kids. And later on, we see Laura reminding Emily, “You know we don’t talk to you kids about the case.”

Isolated thus by her parents, it’s not surprising that Emily explodes when she learns that not only can’t she discuss her future living situation with her parents; she won’t be allowed to communicate her feelings directly to the judge either. 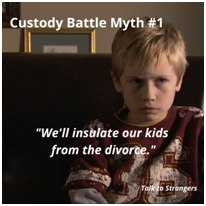 “Great!” she exclaims, “I can’t talk to the judge OR my parents—the only people who count?”

Shielding children from the antagonisms of divorce, and trying to insulate them from the divorce altogether, are two very different things. It’s impossible to “insulate” children from divorce, especially contested custody or access cases that preoccupy both parents and children. And even if it were possible, children don’t need or want it. Ultimately, Nick quits his football team because he can’t remember the plays, what with his mind “all filled up” with the list of questions he carries in his pocket; questions about the divorce that he’s unable to ask his parents. And as the kids feel increasingly adrift in a sea of uncertainty, their relationship deteriorates as well.

Parents who feel they are helping their children by refusing to discuss the divorce, are not only attempting the impossible. They are also adding to the children’s anxiety by ignoring their desperate desire to know where and with whom they will be living.

There is a middle ground where parents share agreed-upon general statements of the progress of the divorce without unnecessary detail or accusations of blame. Parents seeking that middle ground are working toward a goal that is both attainable and in the children’s best interest. It’s not always easy to get there, but it’s well worth the effort.