More acclaim for Talk to Strangers

“As a matrimonial attorney, I don’t much care for movies about child custody cases. I’d seen, but didn’t like, Kramer v. Kramer, Falling Down, and Intolerable Cruelty … “Talk to Strangers” proved me wrong. … Tell your clients who have any interest in fighting a tough custody battle to buy this short movie first (it’s probably the cheapest way to settle a custody battle). Oh, and tell them to bring tissues.” ~ Ronald H. Kauffman, Esq., Miami Divorce Law Blog

“With an unusual degree of sensitivity and subtlety, this wonderful film captures the confusion and anguish that kids often experience in contested divorces, even when all the adults ‘behave’.” ~ Robert Horwitz, Ph.D; Past President: Connecticut Psychological Association; and Connecticut Council for Divorce Mediation

“This is a MUST-SEE for every parent and every divorce professional devoted to creating better outcomes for families touched by divorce.” ~ Rosalind Sedacca, CCT; Divorce & Parenting Coach Founder, Child-Centered Divorce Network

“…a terrific film that should be required viewing for every divorce attorney and for every parent who even thinks about a custody battle. I still can’t watch it without tears in my eyes. It’s an extraordinary thing that [Larry Sarezky] has done!” ~ Chris Burdett, Esq., Connecticut Family Law Attorney

“This film hit so close to home for me, that it actually caused me to tear up several times.” ~ Mark Baer, Esq., California Family Law Attorney; Contributor: Huffington Post

“I kept expecting [Talk to Strangers] to have a happy ending. It didn’t happen. I guess we’ll have to settle custody.” ~ Connecticut Divorcing Father

“What a great film! How I wish we had it when I was getting divorced!” ~ Maryland Divorced Mother

The Making of Talk to Strangers

Talk to Strangers began as the brainchild of Danbury CT family lawyer Deb Grover, a former Chair of the CT Bar Association’s Family Law Section (FLS). Looking for ways to lessen the impact upon children of high-conflict child custody cases, Deb decided to use the medium of film.

Deb found the help she needed to make the film right under her nose. Fairfield CT family lawyer Larry Sarezky, another former FLS Chair, had begun a second career as a writer and filmmaker. Larry’s talents, Deb’s vision and tenacity, and their shared experiences as family lawyers, created a perfect partnership. 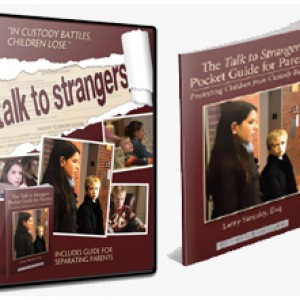 Larry Sarezky is an attorney, writer and award-winning filmmaker with over thirty years experience practicing family law. A past Chair of the Connecticut Bar Association’s Family Law Section, Larry has written and lectured widely on family law issues.

In addition to writing, directing and co-producing Talk to Strangers, Larry authored its companion guide, The Talk to Strangers Pocket Guide for Parents, which offers separating parents strategies and techniques to avoid battles over their children. The Talk to Strangers guide is part of The 21st Century Divorce Guides series to which Larry is contributing his experience, wisdom and wit to assist divorcing couples through the divorce process.

Larry’s other film credits include the highly acclaimed short film, Ed Meets His Maker, which Larry wrote and directed in 2006. Called “beautifully shot” by Alan Arkin, and a “charming story” by The Hartford Courant, Ed is the story of an isolated boy seeking closure on his father’s death. In 2007, Ed won an International Cinematographers Guild emerging cinematographer award, and in 2008, it garnered Larry a “Best Director” award from the Spudfest Film Festival, and was nominated for Best Short Film at both The International Family Film Festival and The Danville International Children’s Film Festival.

Larry also served as co-producer of the Telly Award winning 2010 documentary Wild Horses in Winds of Change which has appeared on PBS stations throughout the US.

Larry is also a composer of music. Teaming up with multiple Grammy and Emmy Award winning composer Brian Keane, Larry co-wrote the original score for Talk to Strangers. Larry’s other composing credits include theme music for Wild Horses in Winds of Change and the theme for the northern California cable TV program, Read Me A Story. Larry’s music is also included in the Songs of Love Foundation collection for seriously ill children.

Larry has also published fiction and has written three feature screenplays, all of which have been recognized by screenwriting competitions.

Brian Keane is a world class musician and composer who has scored over 350 films that have won an impressive collection of awards and produced over 100 CDs with 29 Billboard Top Tens, five of which went to #1. In 2002, Brian became the first composer in the history of the Emmys to sweep all the Emmy nominations for Outstanding Music Composition in a single year. In all, Brian has received 23 Emmy nominations, winning 10, along with many other awards.

A sampling of Brian’s impressive press clippings speaks for itself:
“…Keane writes music on par with Hollywood’s elite composers” (Film Score Monthly)
“…one of the most creative and refreshing musicians of our time” (Billboard Magazine)
“…King Of The Documentary Soundtracks….An amazing composer” (Music Connection Magazine)

In addition to her film editing work, Suzanne Bauman has produced/directed more than eighty documentary films and series. She produced and directed “Jackie Behind the Myth,” a two-hour special on Jacqueline Kennedy Onassis for PBS, and is now producing and directing “The Writing Code,” a series about the history of writing from ancient times to the internet.

An Academy Award Nominee for “Against Wind and Tide,” her films are distributed worldwide, including “Suleyman the Magnificent,” “Cuba in the Shadow of Doubt,” “La Belle Epoque,” “The Artist Was a Woman,” Light of the Gods,” and “The Women of Summer.” Suzanne holds an MFA in film from New York University 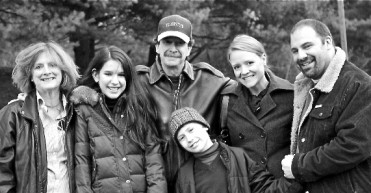 Total Run Time: 25:10
Shot In Hi-Def Video; Color; chaptered for use as a teaching tool

A production of When We Were Nine Productions LLC